ASIA to release a unique live document of the original line-up’s performance of the debut album in full – Out in August on Frontiers! World Tour announced in support of the new Gravitas album! 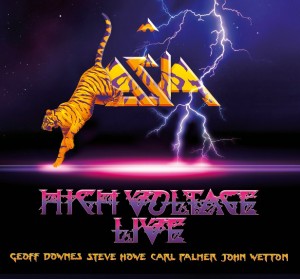 Recorded on the 24th July 2010 at the inaugural High Voltage Festival in Victoria Park, London, this ASIA live CD / DVD captures the band, in the original line-up (featuring Steve Howe on guitar), performing classic material from the 80’s, plus songs from the first two albums of its reunion, “Phoenix” and “Omega”.

The show was performed to an enthusiastic festival crowd, ready to hear ASIA’s eponymous debut album – the world’s biggest selling album of 1982 – performed in its entirety for the first time in Europe. In fact, this remains the only video document of the original line-up performing the debut album in full.

This live CD / DVD is an irreplaceable companion to the original studio album and the reunion that saw the original members of ASIA return to and stay at the top of their game, this time in front of a ‘home audience’.

“High Voltage” will be released in a glossy digi-pack CD / DVD digi-pack format with Roger Dean artwork and the track listing includes:

CD: Only Time Will Tell, Wildest Dreams, One Step Closer, An Extraordinary Life, Time Again, Cutting it Fine, Without You, I Believe, Here Comes the Feeling, Sole Survivor, Heat of the Moment.

DVD: Only Time Will Tell, Wildest Dreams, One Step Closer, An Extraordinary Life, Time Again, Cutting it Fine, Without You, I Believe, Here Comes the Feeling, Sole Survivor, Heat of the Moment.

In related news ASIA has also announced a world tour in support of the release of the brand new album GRAVITAS, introducing its newest member, guitarist Sam Coulson.